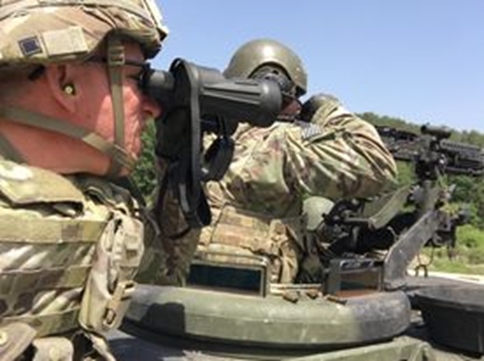 In the past, the Army geared its gunnery program towards combat arms Military Occupational Specialties (MOS). The gunnery program trained combat Soldiers to be highly proficient on their assigned weapon platforms, mounted or unmounted, to safely and accurately engage the enemy during a time of war. Due to the increased combat role of logistics personnel in the operating environment, logistics now require the same weapon system expertise as their combat arms counterparts, especially while traveling on the road, mounted in military vehicles. The Army gunnery program is important for sustainment units to train gun truck crews and increase levels of survivability and functionality.

The Integrated Weapons Training Strategy (IWTS) training circular states, “The IWTS maximizes the use of training aids, devices, simulators, and simulations (known as TADSS) within all force-on-force and live-fire events in a systematic manner to increase and sustain Soldier and unit proficiency, effectiveness, and lethality.” Each crew in a gun truck with a mounted weapon platform consists of a driver, vehicle commander, and a gunner at a minimum. The vehicle commander, normally the highest-ranking, is in charge and is responsible for radio communication with external elements. Each member of the truck keeps a sharp lookout and must call out the distance, direction, and description for the gunner to engage the targets of enemy combatants at the vehicle commander’s order. Each member in the gun crew has their role. However, all of them must work together to qualify their crew on that gun truck.

Gunnery was introduced to the sustainment world in 2010, due to the rising need for sustainment personnel to provide their own protection for supply convoys. According to Captain Brooks, a company commander in the 49th Transportation Battalion, “On today’s battlefield, sustainment organizations with minimal self-defense capabilities are often exposed to direct combat. The 49th Transportation Battalion was the first sustainment unit to complete section gunnery.” In April of 2010, Training Circular (TC) 4-11.46, Convoy Protection Platform Gunnery (CPPG), was released to outline requirements for these units. Training CPPG is now a mandatory requirement for many combat support units to have qualified gun truck crews. This training, although challenging, is necessary to train logisticians on tactical skills that will prepare them to provide security on their convoys in an operational environment.

Convoy Protection Platform Gunnery training is important to sustainment units in order to provide security for themselves in an operational environment. Throughout our military history, there has been a dire need for these units to have their own security, one example being the Vietnam War; Major Green of The School of Advanced Military Studies states, “In 1969, the 1st Logistical Command, during Vietnam, recognized the need and requested the Department of the Army’s assistant chief of staff for force development that transportation truck companies be provided an organic security escort capability.” Major Green continued, “During combat operations in Korea, United Nations forces required between 32 and 37 percent of the combat forces to protect the supply lines.”

For a more modern example, take my friend Anne Adams, whom I went to Advanced Individual Training (AIT) with in November of 2008. Just six months after graduation, she deployed to Iraq with the Tennessee National Guard as an automated logistics specialist. Although she was not in a combat MOS, her time in Iraq was spent either on the road providing security for convoys in a gun truck or serving as a gate guard at her forward operating base. She was not in an office on a computer or in a warehouse as she had trained to do for her job. Therefore, no matter what a person does in the Army you never know when any Soldier, regardless of MOS, may find themselves providing security on a convoy or for base defense.

Gunnery training enables a higher level of survivability and functionality for support units in a combat environment. I served as a senior gunner in the 348th Composite Supply Company during my time in South Korea. As a vehicle crew evaluator, I helped qualify over 60 crews consisting of nearly 200 support Soldiers assigned to units throughout the Korean peninsula. Many of them had never touched a crew-served weapon platform before the evaluation. However, over months of rigorous gunnery preparation and training, we turned these non-combat Soldiers into proficient gun truck crews that could safely identify, engage, and destroy enemy targets in minimal time. Gun truck crews need this time blocked off to get familiar with each other, their weapon systems, and work through any friction that might hinder them from doing their job on a real convoy. After all, it is better to make any mistakes during training rather than in combat. Sun Tzu once said, “The more you sweat in peace, the less you bleed in war.” This is what it takes for sustainment units to better function and survive on the battlefield.

I found that allocating adequate preparation time and repetitions was extremely important. We allocated and started preparing six weeks prior to gunnery to train our Soldiers on the weapon systems, vehicles, radios, and sights; and to gain proficiency working together as a crew. It was easy to spot crews that were not ready for the gunnery range; they were having communication issues, conflict among crew members, frequent weapon malfunctions, and sometimes were missing crew members and essential equipment to complete the mission. Reserving the time to train six weeks prior to gunnery helped these crew bond and train together. This time also allows the crew members to identify, get familiar with, and ensure their equipment is properly functioning. When they arrive at the gunnery range they need to be ready to go. When dealing with a stressful time-restrained exercise, these crews need to be given ample time to prepare for their gunnery qualification. It is more than check the block training, it is survivability and functionality.

The Army gunnery program must continue to be open for sustainment units to evaluate and qualify gun truck crews. It is beneficial for these Soldiers to conduct gunnery training before being deployed and tasked with convoy security. Often these units will have to run convoys without the help of their combat arms counterparts and are forced to provide their own security whether they are trained to do so or not. Therefore, gunnery is very important for sustainment units. There has always been and always will be a strong requirement for gun trucks in logistical missions hauling supplies, rations, and fluids throughout a combat zone.

Alan B. Farr is a Sergeant First Class in the United States Army. He is currently serving as a contracting support specialist in Contracting Detachment A, 902nd Contracting Battalion. He entered service in 2008 serving as an automated logistics NCO, deploying for two tours of combat in Iraq and Afghanistan with 82nd Airborne Division. This article is a reflection on a more recent, one-year unaccompanied tour in South Korea where he served as the headquarters platoon sergeant, vehicle crew evaluator, and gunnery representative for 348th Composite Supply Company. His views do not represent those of the United States Army or the Department of Defense.

This site uses Akismet to reduce spam. Learn how your comment data is processed.